Food culture in the UAE 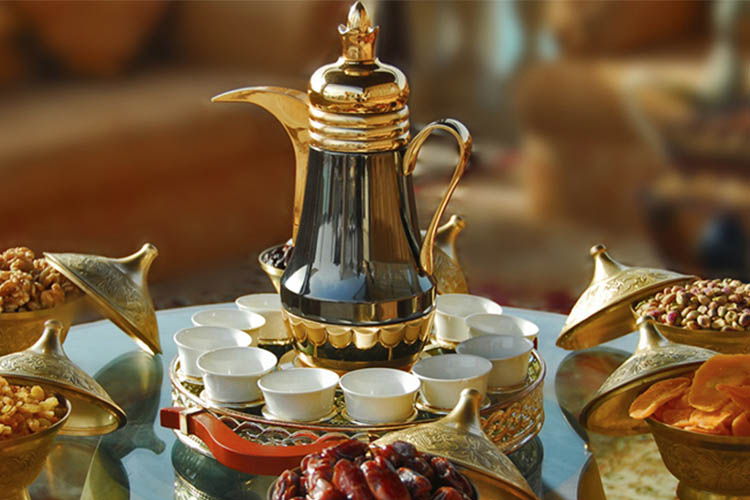 The Arab habit of eating together strengthens family bonds; thus food becomes a means of reinforcing family relations. In winter, especially in Dubai and Sharjah, Arab women and children can be seen picnicking in parks and corniche lawns, sharing tea or their traditional Qahwa, while men chat over a cup of coffee at signature cafes.The coffee club culture is there in all seasons with malls hosting numerous internationally acclaimed coffee shops. Barbecues are also common during winter nights.

Traditional cuisine: Emirati cuisine is a delectable mix of Middle Eastern and Asian cuisine; being much milder than south Asian cuisine, it is easy on the palate and the tummy. The Arabic cuisine commonly consists of dry breads like kuboos and pita with grilled fish and meat like mutton or beef. Fish like hammour is the local popular for grilling but imported Norwegian salmon is also a hot favorite. Frying does not seem a preferred option except while preparing snacks like falafel (which reminds one of the Indian parippuvada) and luqaimat (which looks like the desigulab jamun, though the texture and ingredients are different).

When one thinks of Arabic food, the images that come to mind are of their great traditional Arabic coffee (Qahwa) and dates. The Arabic coffee beans, lightly roasted and ground with cardamom and saffron, is brewed in an ibrik (coffee pot). An immense variety of dates are also available in the UAE-- Saudi Arabian, Palestinian, Iranian etc. – since date palms are a familiar sight in the entire Arabian peninsula and North African (MENA) region. Its prime importance in Arabic life can be gauged from the fact that it is a holy fruit which Muslims take along with water to break their day-long fast during the Ramadan month.

Harees, a one-pot dish made from wheat and meat, is also popular during special occasions like Ramadan and Eid.

Shawarma is a common item in the Arab food but is actually not a traditional Emirati offering. Its popularity stems from the fact that it is a quick and tasty option, and is your food on the go. This could easily pass off as the UAE's favorite food. Here again, the taste and filling can vary depending on where you are -- a Lebanese, Iraqi, Syrian or Kerala restaurant. Combine it with a plate of falafel fritters for as low as AED 1 a plate, and your supper is truly filling.

Tabbouleh is a nutritional salad made of chopped parsley, tomatoes, and bulgur wheat. Vegetarian visitors to the UAE, keen on trying local dishes, can bank on this one dish to keep themselves afloat. Then there is Hummus, a delectable dip, and Fattoush, a bread salad made using fried pita bread.

The Mandi Biriyani may not be everyone's favorite but it is value for money. It probably needs an acquired taste, but going by the number of Mandi Restaurants in the emirates, it must be very popular.

An exotic dish that is reserved for special occasions is the stuffed camel, which has a world record as the largest dish in the world.

There are options for everyone:  Vegetarian, vegan, non-vegetarian.The UAE, especially Dubai, keeps everyone happy with a surfeit of choices. Indian Restaurants, particularly Kerala ones are dime a dozen. Of course, a customer may not visit a restaurant a second time unless the food and service is good. One should be assured of quality and hygiene because the laws are strict.

Fast Food: The well-heeled and worldly wise Emirati doesn't shy away from trying the cuisine of other nations. One can see them in an Indian Nawabi Restaurant like Gazebo or a Japanese joint like Manga Sushi. The mall food courts attract people from all walks of life with somewhat longer queues in front of McDonalds, Pizza Hut and KFC. The junk food bug has bitten the Emirati and the expatriate alike, and spreading awareness through newspapers and school classrooms has not helped in cutting the modern man's fascination for a cheesy burger or pizza or a bucket of chicken popcorn/drumstick.

Malls also provide the casual dining experience. The PF Chang chain or the Bosporus branches may be packed on weekends but they are a break from the monotony of the fast food culture.

Friday Brunch: Nothing celebrates the hard-earned holiday on Friday as the Friday brunch on offer at the big/luxury hotels. Wake up late on Friday (or Saturday for those lucky to have a two-day weekend) and head to your favorite restaurant for a royal meal. Brunches come for as low as AED 50 and as high as AED 600 or thereabouts.

Food Fests: The country is in a festival mood throughout the year, be it shopping, sports or food. The Liwa Dates festival in the western region of Abu Dhabi is a celebration of the desert fruit in July every year. There is a competition for the best variety of dates to enthuse farmers. Then there is the Abu Dhabi Food Festival in December and the Dubai Food Festival in February-March offering mouth-watering possibilities for food buffs.

All in all, the UAE is a foodie paradise. Life never ceases to be exciting here.